SagaBorn Battles is a miniatures game of player vs player skirmishing. The lands of Atheles have long been in a dark age, though now magic has begun to return. Adventurers, tomb raiders, and grave robbers search the lands for ancient relics of magic.

Build an adventuring group, delve into the dungeon or ruins, and battle over the lost relics of the past.

In the chapter on scenarios, we provide examples of ruins and dungeons you can build, as well as goals and victory conditions.

Players are given 400 points to start and spend those points to build a team. A team consists of squads, which are comprised of units. The cost of your team is the total cost of the chosen squads, Talents, and upgrades.The goal is often the recovery of a grand relic or the elimination of the opposing plunderers.

While most battles end before, 12 rounds can be used as a cut off point. Anyone who is left alive after 12 rounds has their points added up and the side with the most points wins. Relics count for 20 points each and must be actively held.

SagaBorn Battles pits two groups of adventurers exploring the ancient secrets, dungeons, and ruins of Atheles. Currently, there are three factions: House Ka’Dal, the Wanderers, and mercenaries (who can be aligned with either side). Future expansions will bring other factions into play. 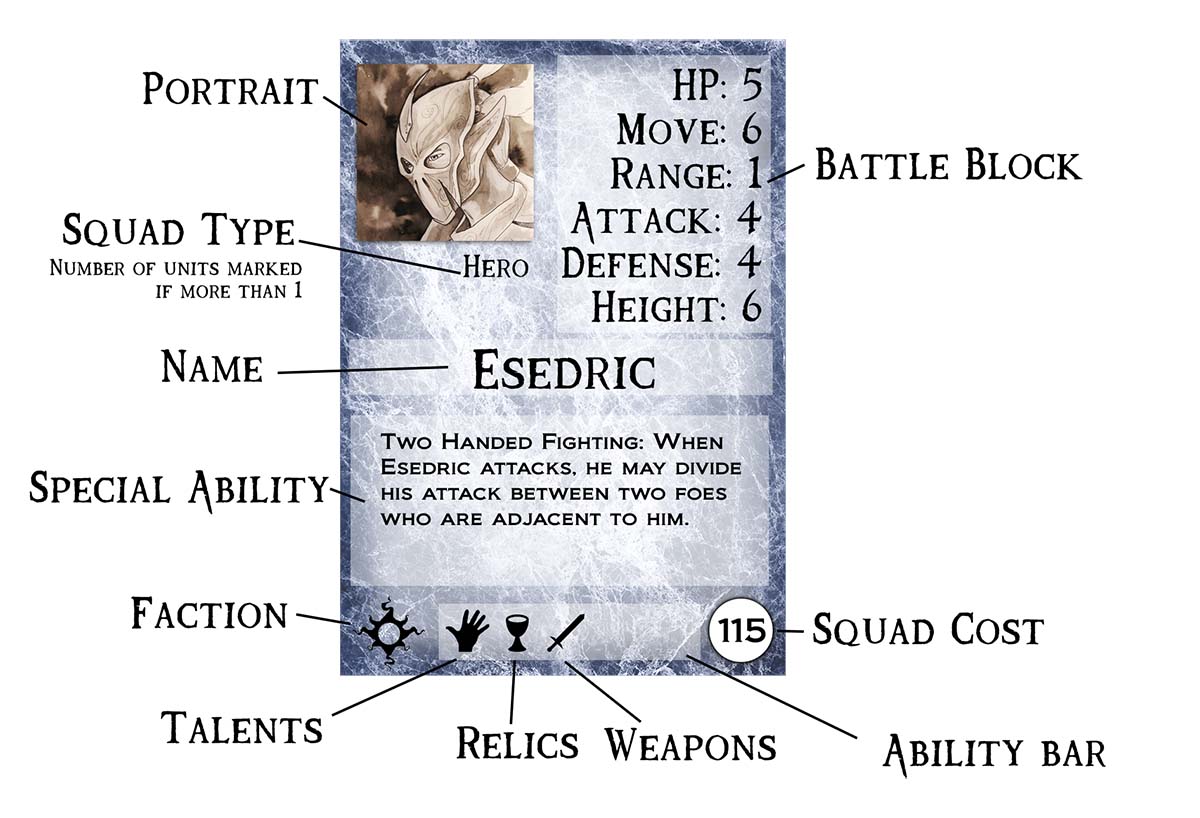 HP (Health Points): This is how many hits a creature can take before it is killed.

Move: The number of hexes a creature can move on its turn.

Range: The maximum distance an attacker can be from an opponent in order to attack.

Attack: The number of dice rolled in an attack.

Defense: The number of dice rolled while defending from an attack.

Height: The highest elevation change a character can climb from one hex to another. A character cannot attack an adjacent unit, nor can they be attacked from a height higher than their height rating.

Talents: Some characters can take Talents, which give them special feats.

Relics: Some characters can use Relics.

Weapons: Some characters can use Weapons.

Initiative is rolled at the start of each round. Each player rolls 3 battle dice. The player with the most hits wins (critical hits count as 2 hits). A winner may optionally pass initiative to their opponent. In larger groups, one person for each side rolls initiative for the team.

The player with initiative chooses one Squad to activate, and then alternating between players until every Squad has been activated. When a Squad is activated, it flips its turn coin (or “taps” its card) to indicate it has been used that round and may not be activated again until the next round.

Brym’s blank and hit are discarded. His shield blocks one hit from Halvar. Normal hits are canceled first, so Halvars hit is canceled, but his critical hit scores. Brym takes 2 damage.

Attack: Using their base attack on the character or creature card.

Heroic Action: A heroic action is a player vs player d20 roll. It is often in response to a special ability or spell. Highest result wins.

Move Action: The player may move up to their full movement.

Standard Action: A standard action is one action that takes a limited amount of time. Examples: Opening a door, picking up and identifying a relic (this is one action), casting a spell, passing a relic to another creature,  or using a relic that has an action.

A Battle Die is an 8 sided die.

Optional Rule: You can convert a standard d8 by using this chart:

Movement is 1 hex (1’’). All hero or creature cards have a rating for movement. A player may move the figure a number of hexes equal to or less than the unit’s defined movement rating.

It costs one additional move point to climb up a vertical terrain level. A figure can climb up the number of levels equal to the unit’s height rating in a move, as long as they have enough move spaces to reach the top.

Some units have abilities that allow them to move up level, or in and out of water with greater or lesser speeds.

Movement out of a hex which is adjacent to an enemy costs double.

If a unit is one or more levels above another unit, it gains one extra die during attacks and defense.

Being in water is considered one level below ground.

Cover and line of sight

A Fey Cat is behind a hill that is 3 high. The attacker draws a line of sight from their eyes to the center of the Fey Cat. If this intersects with the terrain that is higher, then the fey cat has cover.

If a figure has 50% or more cover it gains 1 Defense die.

Friendly units do not block line of sight, but enemy units do.

If a character card has a hand icon, that means they can use Talents. A unit is allowed up to 3 Talents, unless otherwise stated on their card.

Attack: Using their base attack on the character or creature card.

Card: A card represents a battle unit on the table.

Creature: A type of unit.

Exhaust: A card which has one use per turn can be exhausted by turning it sideways. Exhausted cards get refreshed at the start of a new round.

HP (Health Point): The amount of health a unit has.

Height: This is a measurement of how tall a character is. A character can not attack someone who is at an elevation higher than their height score unless they have range. A character who is shorter than a elevation difference cannot be attacked by an adversary adjacent to them unless the adversary has range.

Heroic Action: A heroic action is a player vs defender d20 roll. It is often in response to a special ability or spell.

Initiative: Each player rolls using 3 battle dice. The side with the most hits wins initiative. Reroll ties. The winner may choose to pass initiative to their opponent.

Move Action: The player may move a number of hexes equal to or less than their movement rating.

Squad: One or more units that all belong to the same group, represented by a card.

Standard Action: A standard action is one action that takes a limited amount of time. Examples: Opening a door, picking up and identifying a relic (this is one action), casting a spell, passing a relic to another creature, or using a relic that has an action.

Round: a single round consists of all units completing their moves.

A unit has special abilities, stats, and restrictions based on their card text.

The bottom bar has symbols which represent a unit’s abilities. A hand indicates that a unit may have Talents. A goblet indicates that the unit can use Relics. A sword shows that they can use weapons. If a Squad has the ability to use weapons, only one Unit may equip that weapon for that cost.

Each team is given 400 points they can spend on building a squad. Epic games may have more, and both sides are given equal points. For each 10 points unspent, you gain +1 to your initiative.

Our products available at: 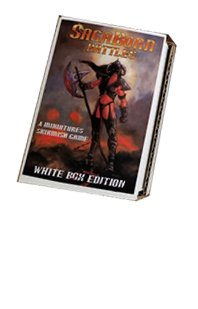 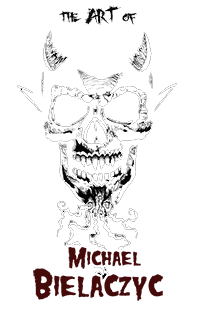